The Alianza del Pacífico agreement signed on 10  February 2014 aims to eliminate most trade and non-trade barriers between Perú, Chile, Colombia and México and also improve the mobility of capital and people. It will also reduce members’ export dependence on single goods (in the cases of Peru, Chile and Colombia) or single markets (as in the case of Mexico), and will create economies of scale that will make it easier to compete with Asian markets. 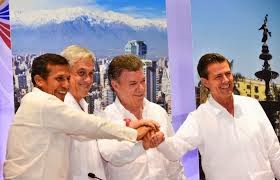 The landmark framework agreement covers a wide range of topics, ranging from the elimination of trade and non-trade barriers on 92pc of the goods traded within the bloc to the adoption of measures to improve the mobility of capital and people. The countries making up the trade bloc have a combined population of over 210m people, a total GDP of US$2trn (and a per-head GDP in excess of US$10,000) and account for around 40pc of all foreign trade and inward foreign investment flows to the Américas (not including the US). The Alianza del Pacífico is due to increase shortly with Costa Rica just been accepted to begin the formal membership process.In addition, the Alianza del Pacífico’s goal of strengthening ties with the Asia-Pacific region means that a broader trade bloc in the Américas will join ongoing talks to create the Trans-Pacific Partnership (a free-trade area comprising Australia, Brunei, Chile, Canada, Japan, Malaysia, México, New Zealand, Perú, Singapore, the US and Vietnam).

The recent agreement has been welcomed in the countries of the Alianza del Pacífico, where it as seen as a massive opportunity for achieving complementarities among its members. México is set to strengthen its intra-bloc exports of value-added manufactures, such as automobiles and metal-mechanics goods. Colombia is expected to benefit from increased exports of basic manufactures, such as processed foods, clothing and leather. And Chile and Perú are likely to boost their cross-border sales of agro-industrial goods.

Furthermore, the Alianza del Pacífico constitutes an opportunity to build strong intra-bloc competitive advantages to penetrate Asian markets. This would be achieved through the creation of productive chains that generate economies of scale. According to a study by the Inter-American Development Bank (IDB), these chains could include the production of fibres and carpets by Perú and Chile; phosphates and detergents between Mexico and Perú; wood, paper and cardboard between Chile and Colombia; and chemicals and plastics between Colombia and México.

But there will be challenges ahead

The Alianza del Pacífco’s success also hinges on its capacity to put in place accords in other, non-trade related areas. Progress has been made on the elimination of visas, the establishment of joint embassies in many Asian countries, and the subscription of agreements to promote education, tourism, small and medium enterprises and infrastructure investment.

However, advances have been limited in more complex areas, such as the harmonisation of customs procedures, rules of origin and tax and financial sector regulation. The lack of progress in the latter two areas, for example, is delaying the implementation of the Mercado Integrado Latinoamericano (MILA, which aims to create a single stock market between Chile, Colombia and Perú and México).

Finally, although it is clear that the Alianza del Pacífico does not have political motivations, Mercosur comprised of Argentina, Brazil, Paraguay, Uruguay and Venezuela and the Alianza Bolivariana para los Pueblos de Nuestra America (ALBA) which includes Antigua and Barbuda, Bolivia, Cuba, Dominica, Ecuador, Nicaragua, St Vincent and the Grenadines and Venezuela are likely to see the recent advances as a threat to their political ideology and existence.